What’s Next For US Inflation And Interest Rates?

The United States is the world’s biggest economy and issuer of the global reserve currency, so decisions by its Federal Reserve (Fed) are watched closely around the world. Egypt and other countries that depend on foreign currency inflows move their own interest rates in tandem with the Fed, enticing dollar holders with high interest on local currency and dollar deposits.

Since 2009, the United States had kept interest rates at 0.25% most of the time, allowing emerging nations space to adjust their interest rates to spur local economies. The near-zero rate in America also helped low and middle-income countries attract foreign investors hunting for quick high returns, aka hot money. Helping to keep U.S. interest rates low was the fact that inflation stayed within the Fed’s 2% target.

However, the pandemic, logistics bottlenecks and economic fallout from the war in Ukraine has caused U.S. inflation to nearly quadruple, according to government data. That forced the Fed to raise interest rates from 0.25% to the current 2.5%.

Egypt’s Central Bank raised its rate from 8.25% to 11.25% in conjunction with the Fed’s hikes. However, it stopped after May, despite continued increases by the Fed. Bloomberg said in a June article that increasing rates further in Egypt could cause a recession. The Monetary Policy Committee (MPC) explained its position in a statement: “[We] treat the developments stemming from the Russo-Ukrainian conflict to be among the exogenous shocks that are outside the scope of monetary policy.” The MPC added the government would “temporarily tolerate” inflation above 9%.

That puts the pound under added pressure for further devaluations as more dollars move to the United States to take advantage of the narrowing gap between Egyptian and U.S. rates. The local currency already has lost nearly 22% of its value this year, and any reprieve would likely depend on U.S. inflation quickly receding. 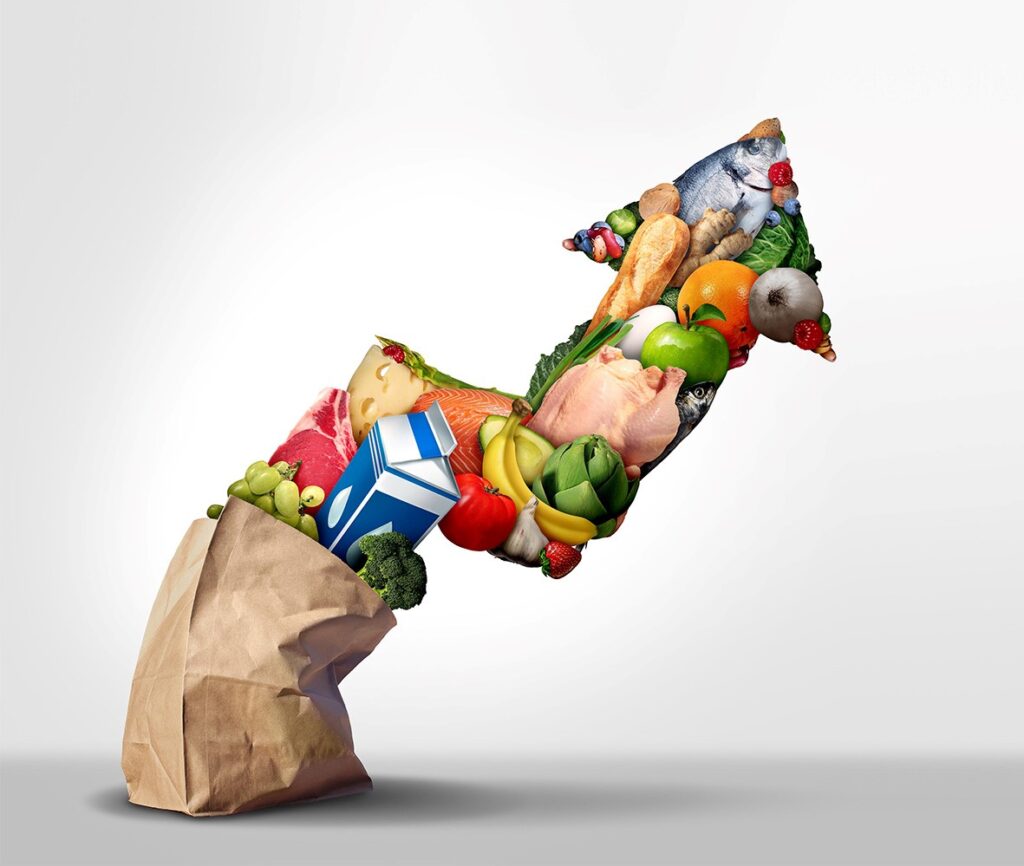 Throughout last year, the Treasury Department and Fed were reluctant to raise interest rates, seeing inflation as temporary due to “short-term pressures that should soon ease,” according to a Deloitte report published in March.

However, by year’s end, Deloitte noted, the United States recognized that economic conditions invited a revised stance: raising interest rates aggressively. Those hikes would start in 2022, according to a statement from the Fed’s Open Market Committee in December 2021.

The Fed strategy has been to raise interest rates at every opportunity in 2022 “without tipping the economy into recession,” reported Alexandre Tanzi of Bloomberg in August.

However, despite raising rates nearly tenfold, inflation remains high. According to U.S. government data, inflation dropped from its 40-year high of 9.1% in June to 8.5% in July, but that is still far above the Fed’s 2% target.

Part of the robust demand for goods amid rising prices came from the three stimulus checks individuals and families received in 2020 and 2021 during the pandemic. They put a total of $3,200 in each citizen’s pocket, plus a total of $2,500 for each “eligible child”. In August, news surfaced that California residents could be eligible for a $400 check as “gas relief,” as pump prices had jumped 60% since the start of 2022.

The best case is the “blue skies” scenario under which Deloitte says inflation “reverts to recent historical norms (about 2%).” That would require supply chain disruptions to “settle” and “consumer demand for services vs. goods [to] rebalance.” Additionally, unemployment rates decrease as the “pandemic ebbs,” and the Fed responds with “gradual interest rate increases.”

That scenario would mean more U.S. companies taking on long-term debt and expanding their capacity. There also might be a rise in mergers and acquisitions to capitalize on GDP growth.

But the “blue skies” scenario could become a “downdraft” scenario where economic recovery happens “faster than expected” and supply chain disruptions get resolved as stimulus checks run out and consumer demand weakens. The current 2.5% interest rate would be enough to encourage consumers to save, and inflation would dip below 1%.

As a result, the Fed would need to cut interest rates quickly to stimulate the economy and prevent recession. It also would start buying bonds to increase their yield. At the other end of the spectrum, the “sun showers” scenario would see the Fed unable to bring inflation down to its 2% target. “Inflation settles at 3% [to] 4% through 2024, as supply chain disruptions persist and the labor supply remains somewhat constrained,” said Deloitte’s report. That likely would result in selective growth across industries and companies, with services continuing to suffer low demand as manufacturers report rising sales.

That also could result in “moderate” interest rate hikes to accommodate “weakness in the labor market.” The worst-case scenario, “stormy weather,” would see inflation continue between 8% and 9% “as rising prices become embedded in worker expectations and a ‘wage-price spiral’ takes off,” said Deloitte’s report. Current problems, including supply chain disruptions, high inflation and declining demand, could make the Fed “sharply raise interest rates … triggering a recession in 2023.”

According to a Federal Reserve Bank of New York survey published in August, U.S. consumers have seemingly brushed aside worries that inflation is long-term. It found that inflation should drop to 6.2% next year, further declining to 3.2% in three years, while the five-year projection would see inflation return to the Fed’s target range at 2.3%.

The University of Michigan’s monthly Consumer Sentiment Index in July showed more optimism, as survey participants said inflation in the next year would ease to 5.2%, down from the June survey’s 5.3% forecast. “That is the lowest one-year price increase expectation since February,” reported Reuters in July. However, the inflation expectation over five years is higher than the New York Fed’s survey at 2.9%.

Those positive outlooks are the result of U.S. petrol prices already dropping from an all-time high of $4.09 to the gallon on June 9 to $2.92 on Aug. 24. More importantly, “consumers now expect gasoline prices to rise by just 1.5% over the coming year,” reported Tanzi of Bloomberg. That compares with a 60% jump the previous year. “There was also a sharp drop in expectations for food-price inflation.”

Tanzi said the jump in average rent prices would likely be below 10% “for the first time since January,” citing the New York Fed’s full report. Supporting that projection is an August survey by Fannie Mae, a government-owned real estate mortgage financier, where respondents expected rents to rise 7.6% in the coming period.

Meanwhile, home prices are expected to go up 3.5%, “the lowest protected gain since November 2020,” said the Detroit Regional Chamber in August. The IMF expects “higher mortgage rates will reduce housing prices, which have grown since the pandemic,” wrote  Andrew Hodge is an economist in the IMF’s Western Hemisphere Department, in July.

Despite the price moderation, demand is not likely to recover, according to the New York Fed. It forecasts household spending will stand at 6.9% compared to a high of 9% in March, just before the Russia-Ukraine war.

Hodge paints a dimmer picture. “We expect [the Fed’s] policy actions will slow the growth in consumer spending to around zero by early next year, easing the strain on supply chains,” he wrote on the IMF website. That would lead to unemployment rising to “about 5% by the end of 2023, which decreases wages.” Nevertheless, Tanzi believes the positive sentiment around inflation projections is good news, as it means that consumption won’t remain low permanently. Those “findings may ease the Fed’s concern about ever-rising prices getting baked-in to household behavior.”

That was evident in July, when Reuters reported that Fed Fund Futures, a financial tool that derives its value from the anticipated interbank rate, shows inflation should “peak” by January. That was “earlier than the February reading.”

Preston Caldwell, head of the investment firm U.S. Economics for Morningstar, wrote in August the Fed might actually “overshoot its goal, with inflation averaging 1.4% [between] 2023 [and] 2026. Price pressures [would] swing from inflationary to deflationary by 2023.” Caldwell explained that would be the result of the “unwinding of price spikes caused by supply constraints in durables, energy and other areas.”

Hodge is wary of the Fed’s inability to control inflation fast enough and the possibility that China might escalate its conflict with Taiwan or lock down cities due to a COVID-19 resurgence or variant. “The longer inflation stays high, the bigger the risk that expectations move up, which then feeds back into wages and prices,” he said. That would invariably lead to higher interest rates for longer, raising the likelihood of a recession, where GDP contracts in two successive quarters.

Despite the recession risk, Michelle Bowman, a member of the Fed Board of Governors, told CNBC in August the Fed should continue to raise interest rates well into 2023. “My view is that similarly sized increases should be on the table until we see inflation declining in a consistent, meaningful and lasting way,” she said. “I have seen few, if any, concrete indications that support this expectation, and I will need to see unambiguous evidence of this decline before I incorporate an easing of inflation pressures into my outlook.”

San Francisco Fed President Mary Daly shared Bowman’s view after the U.S. Bureau of Labor Statistics reported payroll growth of 5.2%. The increases in interest rates are “far from done,” she told the Detroit Chamber of Commerce in August.

PIMCO’s North American economist Tiffany Wilding published a July note suggesting interest rates should rise regardless of inflation rates. Monetary policy in the United States is still “accommodative,” she said, increasing the money supply to boost the economy. “That is increasingly out of sync with economic fundamentals, including the elevated level of inflation.”

That means that low and middle-income countries, such as Egypt, should have a strategy to accommodate a prolonged period of higher-than-usual interest rates. “The only time we will see cuts to policy rates is if inflation declines dramatically,” Dan Belton, fixed income strategist at BMO Capital Markets, told Reuters in July. “From 9.1% [in July] in the [annual] CPI rate to the Fed inflation target of 2%, there is a long way to go.